This week we’ve got news from the majority of the major social media platforms! From Instagram going after TikTok to Pinterest breaking barriers it’s been a busy week! Let’s get stuck in…

The platform have released new information looking at how Snap users are researching and purchasing products. It shows us who brands can connect with buyers through the app itself.

If your target audience is the younger generations then it’s worth having a peek at the info! Snap say:

Although the info is based on US markets – they’re pretty similar to our own and buyer behaviour isn’t down to location it’s down to emotion, wants and needs.

Snap have provided a summary of the data in an infographic:

Instagram has launched their latest feature – Reels Mode. IT aims to match the ease of TikTok, probably Instas biggest rival. Reels is a feature within Stories and aims to keep younger users on the app.

Reels allows users to make short videos with the ability to share & remix them. Pretty similar to the whole premise of TikTok. There’s lots of options to get creative with Reels which will hopefully attract the same users that are using TikTok.

The new mode is currently only available in Brazil will likely be reaching us soon. Instagram’s director of product management Robby Stein told TechCrunch:

“I think Musically before TikTok, and TikTok deserve a ton of credit for popularizing this format.”

There’s clearly no debate that Reels is a move to challenge TikTok. Whether it’ll work or not is a whole new debate.

LinkedIn Reintroduces Option To Invite Your Connections To A Business Page

There’s lots of opinions on whether it’s a good move or not but it’s happening. Page admins can now invite connections to follow their Business Page 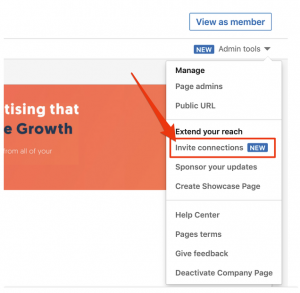 The feature we accessible a few years ago and was taken down as spam occurred as a direct result. Then it was re-introduced in May, removed again and now it’s back!

Companies are set to have access options by the end of next month. There are a few restrictions in place to try and combat the spam issue.

3 new local ad tools are being rolled out by Google to help businesses reach customers in their area.

First, Google is adding a way to show off your store in Google Maps with icons highlighted when people make a local search.

“In the coming weeks, you’ll be able to feature your locations as users get directions to a destination. In just a few taps, they can add you as a convenient stop along their route to grab lunch, stop in for shopping, and more.”

According to Google there are ‘hundreds of millions’ of taps on location pins in Google Maps every week. For businesses, this is a great time to connect with people as they look at your local area.

As well as this new feature Google are also releasing new ads that are like a digital catalogue to Display Network Ads. This will increase your opportunity to connect with audiences via Google’s Display Network. It’s a chance to display more of your products in-stream.

Over the last year or so Facebook have been trying out ‘Breaking News’ tags on posts. They look a little bit like this: 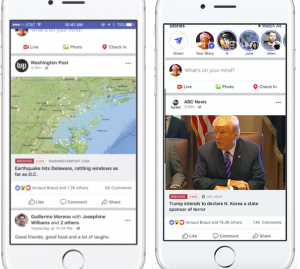 Over the last several months we ran a test that allowed more than 100 news publishers from North America, Latin America, Europe, India and Australia to identify and label stories as “breaking news” on Facebook. We found that people engaged more actively with stories marked as breaking news, showing us that this product helps people find news that’s important to them.”

These tags allow certain publishers the use the tag to a post of theirs once a day. They can choose how long the story will be breaking news for with a 6-hour maximum period. This makes posts stand out more in feeds and ultimately sends more traffic to the publishers content. Facebook say that the tags have helped with post performance. They say:

“In the test period, we’ve seen that breaking news posts about politics, crime, disaster, and business perform best. We’re using data like this to help publishers understand how to use the label to connect people with the breaking news that they need to see most.”

This week Pinterest have published their own set of guidelines for helping employees going through gender transition.

The document was created to assist their own staff however it’s been released to help other companies and organisations. Pinterest say:

“Making Pinterest’s employee culture safe and supportive for people who are transitioning is an important part of living our values. We are deeply committed to creating and sustaining a work environment where everyone – regardless of sex, gender or gender identity – feels valued.”

The guide covers all of the practical points needed to help transitioning employees and includes Pinterests own process. There’s also lots of information on gender transition and tips to help everybody support those going through it.
View Portfolio